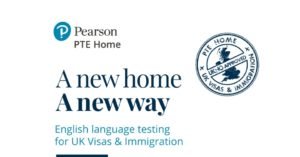 PTE for UK Visas And Immigration

LONDON 16 DECEMBER 2019 10am: Pearson, the world’s learning company, today announced it has been awarded commercial agreements from the UK Home Office to provide Secure English Language Tests (SELTs) to people who need to demonstrate their English language skills to work or live in the UK.

Running for a minimum of three years, the commercial agreements will be delivered through the Pearson Test of English (PTE) Academic and PTE Home – a new speaking and listening test for family visa, settlement & citizenship applicants. Both these English language tests have been internally developed by Pearson.

PTE Academic is one of the fastest growing products in Pearson and is a strategic growth priority for the company, posting 30% growth in test volumes last year. The test is already accepted by the Australian & New Zealand governments for all visa applications. It is also accepted by 100% of Australian, New Zealand and Irish Universities, 98% of UK universities, & more than 2,000 academic programmes in the USA.

The fully digital test is delivered through Pearson VUE, the computer-based testing business of Pearson. The latest AI technology is used for scoring; biometric data collection provides enhanced security measures and voice recognition software is applied for the speaking element of the test. These cutting-edge technologies ensure the provision of an impartial and highly accurate test of people’s English language proficiency.

Furthermore, test takers can book online up to 24 hours in advance, take advantage of year-round worldwide testing slots and receive their results quickly – 1.2 days the average so far for 2019 for PTE for UK Visas And Immigration.

Rod Bristow, President of Pearson UK, said: “We are proud that the UK Government joins the Australian and New Zealand Governments in recognising this test for visa applications, alongside thousands of leading universities across the globe who already accept it for study purposes – including most UK universities.

“Alongside this, our new English language test PTE Home has also been accepted by the UK Government for those who need to prove their speaking and listening skills when applying for family visas, for instance.”

The SELT tests are focused on immigration requirements and the details are as follows:

Furthermore, to date, hundreds of thousands of SELTs have been taken each year by individuals seeking to apply for a visa to study, work, visit or join family in the UK, where evidence of English language ability at a specific level is required,PTE for UK Visas And Immigration.

This represents an exciting opportunity for PTE Academic, PTE for UK Visas And Immigration which will start delivering these tests in early 2020 and will be one of four approved suppliers.

PTE Academic currently has more than 250 test centres in over 50 countries, with its test centre network and global coverage due to rapidly expand to more than 110 countries during the early stages of the commercial agreements – and now including PTE Home.